thyssenkrupp is to fit the first cement plant with a system for the production of calcined clay for the Dutch-based company Cimpor Global Holdings. The technology developed by thyssenkrupp lowers CO2 emissions in cement production by up to 40 %. It involves replacing part of the cement clinker with calcined, i.e. thermally activated, clay. Cimpor Global Holdings will use the technology, known as “polysius activated clay”, on an industrial scale at a new plant being built near the Cameroon sea port of Kribi. On completion in fall 2021, the plant will save more than 120 000 t of CO2 emissions every year.

An important building material, cement is produced by an energy-intensive process in which large quantities of carbon dioxide are emitted. “At thyssen-krupp we are convinced that CO2-neutral cement production is fundamentally possible and can be achieved in several steps,” says Pablo Hofelich, CEO of the Cement Technologies business unit. “We are already very advanced in many areas on the technology side. We offer our customers products that reduce environmental impact and at the same time reduce costs, making it possible for example to significantly cut CO2 and nitrogen oxide emissions and reduce the use of raw materials, water, or fossil fuels such as coal and gas.”

Under the order, thyssenkrupp is carrying out engineering, procurement, construction and commissioning of the new plant, which will produce 720 t of activated clay per day. It is the second calcined clay project of Cimpor Global Holdings.

CO2 is a natural constituent of limestone, the main component of cement. For each ton of cement clinker produced, around 790 kg of process-related CO2 is emitted. Around two thirds of this results from the limestone used, which releases CO2 in a chemical reaction in the production process. At the same time the process requires large amounts of energy, because for the production of cement clinker, limestone has to be heated with other aggregates to temperatures of more than 1400 °C.

With polysius activated clay, thyssenkrupp has developed a technology that allows around one third of the cement clinker to be replaced with activated clay. The clay is heated to around 800 °C – significantly less heat than is needed to produce clinker. Thanks to the significant energy saving in the production of thermally activated clays and the changed chemical composition, CO2 emissions per ton of cement can be cut by up to 40%.

Clay is available in huge quantities worldwide – particularly also in developing countries with growing cement demand such as in Southeast Asia and large parts of Africa and Latin America. In the past clay has often been discarded as a waste product in mining. With polysius activated clay technology, thyssenkrupp offers an innovative solution for the industrial use of clay as a substitute material and a sustainable, low-cost alternative to conventional cement clinker.

“Our technology is not only eco-friendlier, it also creates cost advantages for our customers such as Cimpor Global Holdings,” says Dr. Luc Rudowski, Head of Product Management and Innovation at the Cement Technologies business unit. “In many regions, limestone is in short supply and clinker has to be imported at high cost. Also, stricter environmental requirements and emissions levies in more and more countries are forcing cement producers to rethink. They need an alternative that is cost-efficient and at the same time delivers high-quality cement. That’s exactly what polysius activated clay technology provides.”

Alongside technology for the production of thermally activated clays, thyssen-krupp is working on further products and processes for the “green” cement plant of the future. One example is Oxyfuel technology. While the use of activated clay helps substantially reduce CO2 emissions and energy consumption, a certain amount of limestone is still needed because it is essential for the strength behavior of concrete.

With its pure oxyfuel process, thyssenkrupp has developed a solution for capturing and utilizing the CO2 released from the limestone during clinker production. Instead of ambient air, pure oxygen is used for the combustion process. Because no nitrogen enters the process, the resultant CO2 is highly concentrated and can be separated and stored or reused much more easily, for example as a chemical raw material.

You will find a detailed technical article on “Introducing activated clays on an industrial scale” from page 38. 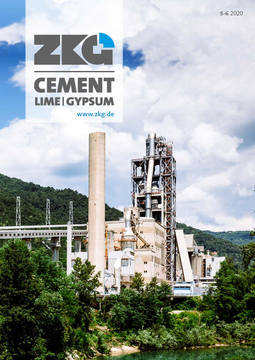 On the way to the polysius green cement plant polysius activated clay is part of a broad-based initiative. The cement plant manufacturer thyssenkrupp is in the process of developing a fully green and...

Secil Group, a major Portuguese cement producer and provider of construction materials, has entrusted thyssenkrupp Industrial Solutions S.A.S. (France) with the modernization project of its Outão...

1 Introduction The cement industry has become one of the largest GHG polluters in the world [1]. Most of the 2.9 billion t CO2 emissions are generated in clinker manufacturing from the...

The production of cement releases large quantities of carbon dioxide (CO2). Only a third of these CO2 emissions result from the combustion of fossil fuels such as coal or petroleum coke, while the...

thyssenkrupp Industrial Solutions has received a contract from Heidelberg­Cement AG to supply a new cement clinker production line. The 4500 t/d facility will be built at the Schelklingen plant in...