During its General Assembly held in Brussel on 09.05., the European ­Manufacturers Association for Plaster and Plasterboard Products (Eurogypsum) elected Bernard Lekien as President for the 2016-2018 period. Bernard Lekien succeeds the CEO of Saint Gobain Gypsum, Claude-Alain Tardy at the expiry of his statutory term of office.

Bernard Lekien is a civil engineer graduate of the University of Liège. He has also a MBA from the University of Austin, Texas. He joined the Lafarge Group in 1982 and held a variety of positions at the company’s headquarters and its cement and gypsum divisions. Since 1989, he has been a member of the gypsum division Executive Committee. In that year, he became Managing Director at Lafarge’s Plasterboard division. First in Italy, later in Germany and the Netherlands, then France and Belgium, and finally in southern Europe. In 2010, he became Senior Vice-President Western Europe of Lafarge’s Gypsum division. When Etex acquired the European and Latin American activities of Lafarge in 2011, he became Head of the new Siniat division in Europe. Since September 2014, Bernard is Honorary President of Siniat International and Senior Advisor to the CEO of Etex.

During the General Assembly, Bernard Lekien declared: “I am convinced that the 21st century material is gypsum with unique properties for a sustainable building (recyclability-flexibility-sound insulation-fire resistant, aesthetic to name a few). During my presidency, I will concentrate my efforts to facilitate the sustainable access to natural gypsum deposits in Europe, key for the development of our environmental solutions, promote recycling of gypsum products and enhance the substitutability of natural gypsum.” 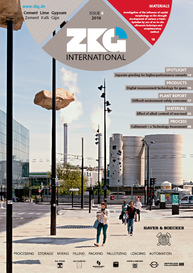 Eurogypsum, the European Manufacturers Association for Plaster and Plasterboard Products, has chosen Jörg Ertle as its new President. The associations Board of Directors unanimously elected the...

New Secretary General for the EU plaster and plasterboard industry

Tristan Suffys has been appointed as the new Secretary General of Euro-gypsum, the European Manufacturers Association for Plaster and Plasterboard Products. He will replace Thierry Pichon, who assumed...

50 years support for the interests of the European Gypsum Industry

On 16.06.2010, Eurogypsum celebrated its 50 years anniversary. To mark this event, Eurogypsum wanted a city representative of the European spirit (Fig. 1). Historically Strasbourg has been a bridge of...

Bernard Lekien has been the president of the European Gypsum Association since 2010. On the 29th ­Eurogypsum Congress in Kraków/Poland on May 10th/11th 2012, his tenure ended and Maurizio Casalini...