Over the last few years Schade’s projects have focussed strongly on the power sector, but its latest two orders have come from the cement industry. In July Schade, an Aumund Group company, secured the order to supply two bridge type reclaimers and a stacker to Kyzylkumzement in Uzbekistan as its technical solution, which was preferred by the customer over those of its five cement industry competitors. The two reclaimers, each with a capacity of 1000 t/h and a rail span of 30 m and the 1200 t/h stacker will be delivered in the autumn of 2017 so that the plant can be commissioned in early 2018. The project is being realised with the aid of World Bank financing.

The order is part of the modernisation and improvement of cement plants that was called for two years ago by the Uzbek construction materials collective, Uzstroymateriali. This investment programme comprises nine projects for modernisation and reconstruction at three of the largest cement works in the country, Kyzylkumzement in Nawoi and Akhangaranzement, and Bekabadzement in the Tashkent region. The investment volume at Kyzylkumzement alone is in the order of US$ 40 million. Currently there are six cement works in Uzbekistan with a total installed capacity of around eight million tonnes.

Schade will also supply in autumn 2017 a full-portal reclaimer for limestone, with a capacity of 700 t/h and a rail span of 42 m, to Caribbean Cement, the only producer of Portland cement in Jamaica.

The Caribbean Cement Company Ltd., or Carib Cement, located in Rockfort, near the capital city of Kingston, has been producing cement using 100 % Jamaican raw materials since 1952, and has a cement manufacturing capacity of two million t/a.

The project phase leading up to this order had been going on for almost 20 years. Rather than investing in a new machine the initial plan was to convert an existing one. In the end the management decided that the purchase of a new machine would be more economical than incorporating all the required modifications into the existing machine. 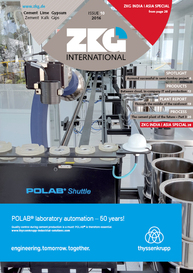 After a career spanning 47 years, the last six of which were spent as a successful Managing Director of Schade Lagertechnik GmbH, in Gelsenkirchen/Germany, Karl-Heinz Fiegenbaum was given a fitting...

Cimento Itambé has awarded Aumund do Brasil and Schade Lagertechnik GmbH, Herne, a contract for the rebuilding of a limestone storage facility. Apart from the refurbishment of an existing scraper...

The award by Sinoma of several orders for Nigeria and Senegal to companies of the Aumund Group has consolidated Aumunds position on the African continent. Working closely with Sinoma Nanjing NDI,...

In May 2017 Aumund Fördertechnik GmbH won the order for three drag chain conveyors with capacities from 7.5?t/h to 200?t/h for discharge of limestone, gypsum and pozzolan for the new cement plant in...

The Turkish company DAL Teknik Makina, which is involved in turnkey projects worldwide, placed an order for a Pfeiffer MPS 3350 B vertical roller mill for raw meal which is to be used for the...