The cement producer Thai TPI Polene Public Company Limited has placed an order with Siemens for engineering and supply of the power distribution system and drives for the new clinker production line in Saraburi, Thailand. The deal for the drive systems covers 20 slip-ring rotor motors for the main drives, twelve gear units, 33 variable-speed drives for fans and two multiple drive systems for cooling units. Operation is due to commence in October 2014.

www.siemens.com
This article appeared in 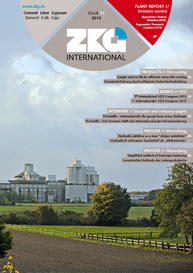 On 30.01.2018, the World Cement Association announced that one of Thailands leading cement producers, TPI Polene, has joined the organisation as a Founding Corporate Member. The association now...

The Hamburg-based drive specialist ­Currax is a full-service provider of the entire drive chain for conveyor belts in raw material production: Motors, gear units and couplings are combined to form an...

1 Introduction The Association of Southeast Asian Nations, or ASEAN, comprises ten countries, which, in their Vision 2020, agreed on living in peace, stability and prosperity, bonded together in...

1 Introduction The Association of Southeast Asian Nations, or ASEAN, comprises ten countries, which, in their Vision 2020, agreed on living in peace, stability and prosperity, bonded together in...

One of Thailands largest cement producers, SCG, awarded a contract to Claudius Peters for the delivery of a new cement silo. The silo will be delivered to Mawlamyine Cement, 300 km southeast of...