The Austrian building materials group Wietersdorfer & Peggauer Zementwerke GmbH (brand name baumit) placed an order with BT-Wolfgang ­Binder to set up a sand processing and mixing plant for building materials in Russia. This new plant with a value of about five million Euros is located in Kikerino (approx. 80 km west of St. Petersburg) and will annually produce about 50 000 t of mortar, adhesive and various screeding compounds. There a modular plant concept was used, which was developed by BT-Wolfgang Binder and which had already been used successfully in Latvia and Byelorussia. The individual modules had been pre-assembled in ­Austria to minimize the erection and commissioning time at the site. With the slogan “START-EXPAND-MOVE” the scope of plant is expanded in the modular design system and adapted to the corresponding market situation. With a positive market development, a stationary plant is installed instead of the modular one. Then the modular plant is dismantled and can be erected at a new site. When changing from a modular to a stationary plant, the production downtime amounts to a maximum of two weeks. Due to this flexibility it is easier to enter new countries and markets. The plant will be commissioned early in 2012.
www.btw-binder.com
This article appeared in 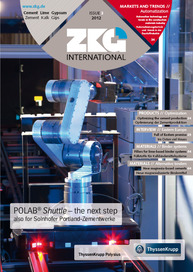 In November 2013, Mapei awarded a contract for the construction of a new dry building material mixing plant to the Austrian general contractor BT-Wolfgang Binder GmbH. The contractor carried out the...

PT Anugerah Mortar Abadi is part of the Indonesian Triputra Group. In Wanaherang near Jakarta the company has taken a new dry mortar plant into operation. Here, various types of plaster, mortar, tile...

1 Introduction Müllerkalk supplies both special binders for ground stabilization and agricultural lime from the Üxheim-Ahütte plant. The raw materials required for this mainly come from the lime...

Doubrava Gesellschaft m.b.H. & Co. KG  is a private owned company founded about 60 years ago by Mr. Eric Doubrava, the father or the present CEO Mrs. Veronika Doubrava- Plankensteiner. In the last 60...

Large production volumes with automated mixing tower plants Dry premix mortars are becoming a common sight on building sites not only in the Western hemisphere. In Thailand, contractors may even be...