As a general contractor, Ibau Hamburg led the construction of a cement terminal for Cementa HeidelbergCement Group at the port of Malmö/Sweden (Fig. 1). The multi-chamber silo, which is fed by a mechanical pneumatic ship unloading system, is 100 m high, has a diameter of 26 m and contains 30 000 t of cement. Automatic loading of tanker trucks and wagons is carried out 365 days a year.

Haver & Boecker supplied the complete electrical system and automation for this cement plant. The systems include the following components:

PCS7 process control system with CEMAT, according to Heidelberg­Cement standard

Switching and control cabinet with S7-400/ET 200M, according to Heidelberg­Cement stan­dard

IT network and infrastructure

During the planning phase, ­Haver & Boecker worked in close cooperation with Ibau and the HeidelbergCement Technology Center in Brussels and it was decided that the control room in the multi-chamber silo would be moved to Level 1. This offered the advantage of considerably reduced cable paths through silo walls. Because space for the switching and control cabinets, energy distribution and transformers was limited, Haver & Boecker opted for maintenance-free, gas-insulated medium switchgear (Fig. 2). The electrical installation involved a number of demanding challenges for the personnel. Installation of the cable works and laying the cable in the bucket conveyor ­tower – from Level 0 to 100 metres – required special cranes and had to be carried out by workers who were not afraid of heights (Fig. 3).

One challenge for the auto­mation systems supplied by Haver & Boecker was adapting the PCS7 process control system to the silo processes so that clear and well-arranged pro­cess groups resulted, thus allowing easy operation and rapid fault detection (Fig. 4) The tanker trucks and wagons are automatically loaded according to the shipping orders thanks to the data exchange between the process control unit and the shipping system provided by ­Cementa AB. By cooperating closely with the ­HeidelbergCement Technology Center Brussels, the pro­cesses were optimised so that the ­terminal could be operated without operating personnel. After the start-up of the facility, the terminal was successfully handed over to Cementa AB in March, 2012, after almost 2 years of planning and construction work.

Haver & Boecker extends its thanks to the HeidelbergCement Technology Center Brussels, ­Cementa AB, the terminal operator, Ibau and all subcontractors for the excellent cooperation, without which this successful result in such a short time would not have been possible. 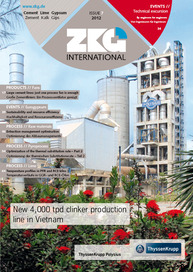 1 Introduction In the mid 1970s, the existing silo solutions for large capacity silos with a diameter of more than 10 m used the same process of aerating the entire silo floor in order to generate...

Contract for complete plant planning, civil works and engineering Cimfaso contacted Oelde/Germany for the first time in the spring of 2013. The company had planned the construction of a cement mill...