The main technological principles of this rotary kiln burner from Messrs GRECO are based on calculations and studies undertaken by Prof. Clemente Greco, who lectured in Brazil at the Institute of Thermodynamics. In the 1990s, practically the entire Brazilian cement industry was converted to petroleum coke firing in order to save on fuel costs. Greco was one of the leading providers of burners for petcoke, as this initially difficult to handle fuel placed special demands on the burner concept. Today, this basic concept of rotary kiln firing is still in use. Grecoburners were developed further and optimized for combined firing with alternative fuels. Current rotary kiln burner design developments aiming at a 100 % alternative fuel usage rate are already well advanced.

In the early 1990s, Greco constructed rotary kiln burners for the local cement manufacturing industry and was among the first suppliers to provide the burners needed for changing over the numerous heavy oil and coal firing systems to the cheaper petcoke fuel. From today’s viewpoint the company’s petcoke burner design was advanced technology. The burner’s axially symmetric design and high momentum enabled the effective use of petcoke, which significantly reduced fuel costs. Up to now, Greco has supplied more than 300 such burners for successful use in cement plants all around the world.

Since its beginnings, Greco has maintained its good corporate philosophy of customized burner geometry precisely tailored to the customer’s particular requirements. Today, the company’s main development activities are located in Austria, where Greco has built up and operated its technical centre since 2010 with the participation of pyroprocessing specialist A-TEC. The R&D division’s comprehensive testing facilities support the company’s further developments in burner design.

The FLEXIFLAME™ burner operates with an outer, high momentum flow of primary air (external air), whose high momentum and therefore high exit velocity is decisively responsible for the slim, firm shape of the burner flame (Figs. 1 and 2). The arrangement of the primary air outflow as individual jets has a very favourable effect on the combustion, as it assures rapid mixing of the hot secondary air into the flame. The form of the flame is adjusted by means of the primary air momentum. To the outside and inside of the burner’s coal/petcoke channel, there are two inlets for swirling airflows (tangential air & dispersion air) that intensively mix the pulverized coal. This so-called double-swirl gives the flame a high stability (providing superior flame control) and results in rapid flame formation (flame ignition point close to the burner). Compared to other burners, the flame geometry in the kiln is easy to control, a fact that is evidenced by the thermal profile of the kiln shell.

The central elements of the burner, such as the oil lances, solid fuel pipes, igniter, etc. are guided and cooled via a burner tip plate. If the mixture of fuels and the arrangement of the channels permit, an axially symmetric design is used, as this ensures better flame control than an asymmetric design. The very safe construction enables extremely precise setting of the burner. As all burner channels are separately adjustable, their functioning can be clearly followed.

The important mixing momentum of the burner is selected on a customer-specific basis, depending on the kiln application, the system configuration, the fuel composition and the clinker analysis. This customer-specific burner design with a sophisticated nozzle geometry has achieved excellent operating results and thus reduced the fuel costs even in the case of very sensitive kilns, such as a white cement kiln with planetary cooler (low secondary air temperature) operated with a fuel mixture of petcoke and solid alternative fuels (sawdust & fluff). Typical specific burner design criteria are:

The specific axial burner momentum Ia [N/MW] can be calculated according the Eq. 1
Ia = ma ∙ va / Pth⇥(1)
With ma as the  mass flow of axial primary air [kg/s], va as the speed of axial primary air flow [m/s] and Pth = the thermal burner power in sintering zone [MW].
A further basic concept of the Greco burner is minimization of wear. This is achieved by means of the following design features:

The alternative fuel pipe inlets are wear-protected with composite material

It is well known that petcoke has particular characteristics as regards complete burnout in the flame and transmission of heat to the material to be burnt. It has to be taken into consideration that petcoke has a low content of volatiles and that this results in late ignition of the fuel, which lengthens the black ignition zone of the flame. As soon as the fuel has ignited, carbon combustion commences. This can last longer than it does in the case of normal hard coal and can therefore produce a longer flame.

Particularly in the case of burner designs that work with lower mixing energies (mixing momentum I = m ∙ v), i.e. with low primary air pressures and primary air rate, the lengthening of the flame is measurable and results in a longer sintering zone. This longer sintering zone can cause undesirably excessive growth of the clinker crystals, which in turn results in larger clinker granules. Shortening of the flame by the use of higher swirl air rates, which is often assumed to be an effective countermeasure, actually only partially compensates this process because the insufficient primary air momentum restricts the swirl to the periphery of the flame and prevents it from penetrating into the flame core. As a fundamental principle, the burner should not induce a high degree of flame swirl, as this leads to the so-called diabolo effect, i.e. an initial constriction of the flame followed by a trumpet-shaped flame expansion with a high rate of flame swirl, which is counterproductive for the burning process.

Kiln process studies combined with burner optimization measures have shown that the fundamental combination of lower primary air rate and higher momentum has the beneficial effect of reducing the NOx generation. The setting of the swirl air channel (dispersion air) that is located to the inside of the coal channel has a significant influence on the NOx emission. The burner observably reacts to a reduction of the internal recirculation zone with a decrease in NOx generation. This effect of the burner is certainly of advantage in particular kiln systems and with particular fuels.

Burner technology of the future

Due to the market situation in Europe, further development of pyroprocessing technology is being directed at achieving an alternative fuel usage rate of 100 %. The necessary burner geometry will differ decisively from the technology known today. Both 2-dimensional and 3-dimensional alternative fuels will be employed (RDF, fluff, plastics, pre-treated domestic refuse etc.), which will be specially prepared and will permit substitution rates of up to 100 % in the planned new burner series. The solid alternative fuel will be additionally conditioned to permit controlled ignition, flame formation and burnout similar to the characteristics of a coal flame. The known disadvantages of the current main burner technology, such as flame displacement (double flame formation), reduced combustion, high inlet temperatures and lower clinker quality should then be a thing of the past. The cost of classical fuels contains a high savings potential that is of great interest to all clinker producers. This new technology, in which Greco is again a prime mover as in past developments, will soon (by the end of the year) be presented to the market.
www.greco-ltd.com 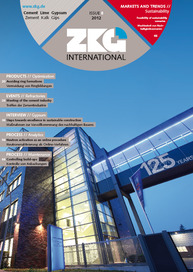 A TEC Greco will deliver its Kiln Burner to HeidelbergCements plant at Burg­lengenfeld/Germany. The project will be realized by the end of 2016 and is part of a complete modernization of the plant...

The recent merger between A TEC and GRECO ­Combustion Systems was helping the innovative burner producer to establish a new engineering head office in Austria. A TEC and GRECO are operating together...

Due to rising fuel oil costs ­Ciments Calcia, a member of Italcementi Group, decided to change their complete fuel system on the kiln burner at their plant in Couvrot (Dep. Marne/France). In...

1 Historical review The main technological principles of high momentum kiln burners by A TEC Greco are based on calculations and studies undertaken by Prof. Clemente Greco (1937-2003), who lectured in...

Kiln burner and further equipment for cement plant in UK

Kerneos decided to equip its plant in West ­Thurrock, 35 km east of London, UK with a new kiln burner. A TEC Greco obtained the project and started to investigate the special kiln and process...