HeidelbergCement has substantially increased its operating income in 2015, as predicted in the 2014 Annual Report.

“2015 was by far the best year for HeidelbergCement since the financial crisis”, said Dr. Bernd Scheifele, Chairman of the Managing Board.

Sales volumes of the core products cement and ready-mixed concrete have recorded a stable development compared with the previous year. The rise in cement deliveries in North America and Africa almost compensated for the decrease in Europe and Asia. In ready-mixed concrete, the contraction of the Asian market was more than offset by the positive development of sales volumes in Eastern Europe, particularly in Poland and Georgia, and in North America. The growth in aggregates sales volumes can be attributed to the favourable trend in North America and Eastern Europe. Thanks to successful price increases in important markets and supported by positive currency effects, revenue is up by nearly 7 % to € 13.5 billion. The depreciation of the euro, particularly against the US dollar, the British pound, and some Asian currencies, has contributed to an increase in revenue of € 795 million and in operating income of € 84 million for the full year. OIBD improved by 14 % to € 2,613 million (previous year: 2,288) and operating income rose by 16 % to € 1,846 million (previous year: 1,595). Adjusted for exchange rate and consolidation effects, operating income improved before and after depreciation and amortization by 8 % and nearly 10 %, respectively. In addition to the price increases in key core markets and the successful implementation of the programmes to improve efficiency and margins, the slightly declining cost of fuels also made a contribution to the positive development of results.

Business development in Western and Northern Europe during 2015 benefited from the continued recovery in demand for building materials in the United Kingdom. In contrast, the development of sales volumes in Germany was not able to fully match the strong previous year’s level. Construction activity regained stability in the Benelux countries. In Sweden, cement sales volumes benefited from increasing domestic demand, particularly in residential construction. On the other hand, the low oil price led to a slight drop in business activity in Norway. The decrease in cement and aggregates deliveries in Western and Northern Europe can be mainly attributed to the decline in exports from Northern Europe.

Unlike sales volumes, revenue increased. Some of the contributing factors were successful price increases, positive currency effects from the depreciation of the euro against the British pound, and the consolidation of the concrete product activities in Northern Europe with the Norwegian KB Gruppen Kongswinger AS to form the new Nordic Precast Group AB. The significantly improved results were enhanced by reduced energy costs.

The Eastern Europe-Central Asia Group area experienced varying developments in the course of 2015. In Poland, the Czech Republic, and Romania, economic recovery boosted construction activity. In contrast, the conflict in the Ukraine severely impaired the Ukrainian and Russian economies and led to a drop in demand. In Kazakhstan, the ramp-up of production at the new cement plant represented a significant growth driver. Taking the year as a whole, the decline in the Ukraine and Russia could not be offset by the rising cement demand in most countries. On the other hand, sales volumes of aggregates and ready-mixed concrete saw an encouraging increase.

Revenue in Eastern Europe-Central Asia decreased due to the distinctly negative exchange rate effects resulting from the devaluation of the currencies of the Ukraine, Russia, Georgia, and Kazakhstan against the euro. Falling prices owing to the price pressure from imports also had a negative impact on operating income.

In North America, the recovery of demand for building materials continued, driven especially by the ongoing economic recovery, falling unemployment figures, and the increase in residential construction. Particularly strong growth of building materials deliveries was registered in the North of the USA. While there was also an encouraging trend in sales volumes in the West region, growth in the South stagnated due to poor weather conditions, among other things.

2015 saw the wettest weather since records began in 1895. The drop in sales volumes in the Canadian Prairie provinces as a result of the decline in oil production projects was compensated to a degree by gains in the Vancouver and Seattle regions. The rise in sales volumes and successfully implemented price increases led to a noticeable improvement in revenue and operating income, which was reinforced by the significant appreciation of the US dollar against the euro.

Economic growth in the Asia-Pacific Group area has slowed down substantially. In Indonesia, delays in infrastructure programmes led to a weak development of demand and to price pressure as a result of excess capacities. Sales volumes of cement and ready-mixed concrete were down due to the margin-oriented pricing policy of our subsidiary Indocement. In Malaysia, demand for aggregates and ready-mixed concrete decreased following the completion of large projects. In Australia, sales volumes of building materials increased despite a reduction in mining and infrastructure projects. The growth in sales volumes in Australia, Bangladesh, and India did not, however, compensate for the downturn in Indonesia and Malaysia.

As a result of the decreasing sales volumes and the price pressure, revenue and operating income also fell in the Asia-Pacific Group area. The decline was partially compensated by positive currency gains owing to the devaluation of the euro against some Asian currencies. Despite price pressure and cost inflation, the operating margin was almost stabilised by means of systematic cost-saving measures.

The positive development of demand in Africa continued in 2015. Thanks to expanded capacities in Togo and Burkina Faso, it was possible to further increase cement and clinker production. One of the few exceptions was Ghana, where sales volumes decreased as a result of the negative effects of the drop in the oil price on the economy. Overall, competition and price pressure have increased in the countries south of the Sahara.

Based on the growth in sales volumes across all business lines, revenue in the Africa-Mediterranean Basin Group area has also risen. Both operating income and margins have increased significantly. The falling cost for clinker imports and efficiency improvements, particularly the commissioning of the new plant in Togo, have offset the pressure on prices.

Takeover of Italcementi is making

The evaluation of potential synergies was provisionally concluded at the start of 2016. On the basis of additional potential identified in many areas, the synergy target was considerably raised once again, from € 300 million to € 400 million. This includes positive effects of financing costs and taxes.

The financing of the takeover is also making progress. In January 2016, the refinancing need in the bond market was reduced to below € 2 billion following the successful issue of debt certificates totalling € 645 million. A bridge financing of now € 2.7 billion continues to be available for the acquisition.

In North America, HeidelbergCement expects a continuing economic recovery and consequently a further increase in demand for building materials. In Western and Northern Europe, positive market development is expected. In Eastern ­Europe, HeidelbergCement anticipate growing demand for building materials as result of the EU infrastructure programme, among other things. The crisis in eastern Ukraine is continuing to impair the sales volumes and results of the country. The economic situation in Russia and Kazakhstan remains difficult due to the low oil price. In the African markets, HeidelbergCement expect a rise in competition besides the ongoing growth in demand. In Asia, HeidelbergCement anticipates a general upturn in demand, thanks in particular to increasing infrastructure investments in Indonesia. Never­theless, a further decline in demand and an increase in excess capacities are expected in China. The repercussions on export volumes are limited, however, because a large proportion of Chinese capacities is located inland. 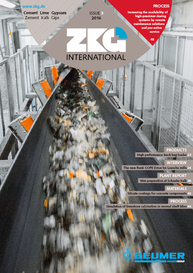 In its meeting on 09.10.2015, the Supervisory Board of HeidelbergCement has set the course for a generation change on the Managing Board. In the context of the long-term oriented succession planning...