The cement plant belonging to the Volan Cement Plant Group in Inner Mongolia has changed over the blowers of three of its production lines to variable-speed operation. The result: By using frequency converters, the electrical energy consumed was reduced on average by 36  % with respect to the previously-used throttle controls. Furthermore, variable speed operation reduces the load and stress on the plant mechanical system and ensures a more precise process control. As the drive systems can be connected to an energy management system, the retrofit to variable-speed operation resulted in additional decisive energy-saving potential that opens up new market opportunities for the operating company.

1    Introduction
The factory belonging to the Volan Cement Plant Group, located approx. 100 km from the city of Jining in Inner ­Mongolia has four production lines and produces a total of 10 500 t/d of cement. The factory that went into operation in 2000 set itself a goal to reduce its overall consumption by 20  %. It was already quite clear that special emphasis would have to be placed on the drive technology as it consumes the largest percentage of the electrical power of a cement plant (Fig. 1). The drives of fluid flow machines – such as pumps or fans with square-law load characteristic (M ~ n²) – were considered to be the highest energy consumers. In a cement plant, these are predominantly the blowers for the kiln, coolers and mills (Fig. 2).

2    Variable-speed operation represents
the highest potential
This is the reason that personnel from Siemens Industry Automation Ltd., Shanghai quickly defined the most effective meas­ure. Instead of regulating the airflow using mechanical throttles, which were used up to the present, this was now to be effected by changing the motor speed using a frequency converter. For example, with mechanical control principles such as throttle valves, the fan motor always operates at full speed. This means that it continually draws the rated power, which is dimensioned for the maximum flow rate, from the line supply. The airflow is reduced according to the demand using mechanical throttles. The amount of energy wasted is the difference between the actual flow rate and the maximum possible flow rate.

However, variable-speed operation using frequency converters brings with it additional advantages. The throttles that were previously used to regulate the air flow always became worn very quickly due to the fine cement dust. As a consequence, they have to be continually serviced or replaced. The new frequency converters also eliminate this cost factor. Furthermore, converter-based variable-speed operation eliminates the current peaks when accelerating and in turn, the associated torque surges that can be quite significant. The soft starting and stopping also reduces the load and stress on the mechanical system of the complete drive train – and increases its lifetime. Pressure surges, that put considerable stress on the piping system, are now also a thing of the past.

4    Higher-level energy management system n preparation
From all of these positive aspects, as a result of the increasing energy costs, the electrical energy saving potential was certainly one of the most important arguments for variable-speed operation of the blower drives. This is the reason that in a second step Volan will integrate the frequency converters into a higher-level energy management system. Siemens has already prepared the corresponding interfaces (Profibus DP) for this purpose. The energy management system is based on a combination of Siemens concepts – “Totally Integrated Automation” and “Totally Integrated Power” – which include seamless and integrated solutions for automation and power distribution. The central system component is a control platform for the operational energy management. This control platform continually monitors and optimizes the energy flows throughout the complete process. This means that the cement plant can further reduce its energy consumption to improve its overall energy balance even more.

5    Conclusions
Equipping the blowers in the Volan cement plant with frequency converters from Siemens resulted in energy cost savings that were so high when compared to the previous throttle control that the operating costs were significantly reduced. Not only this, variable-speed operation reduces the load and stress on the plant mechanical system and ensures a more precise process control. Furthermore, because the drive systems can be connected to an energy management system, the retrofit results in additional decisive energy saving potential that opens up new market opportunities for the operating company. 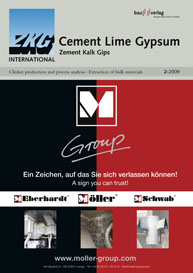 FLSmidth MAAG Gear AG of Winterthur/Switzerland is launching a new drive concept (Fig. 1) at the ­Hannover Messe trade fair. In the ­novel, integrated and modular MAAG CEM Drive, this company...

ABB has received an order for the first gearless mill drive (GMD) system ever to be installed in an Indian manufacturing plant. The order was placed at the end of October 2009, by the Indian cement...

Ventilatorenfabrik Oelde GmbH (Venti Oelde) has built a new performance testing facility for centrifugal fans, both heavy-duty and special construction, in a record time of only three months (Fig. 1)....