China is a developing country with coal as its main energy resource. The energy infrastructure is dominated by the coal fired power industry. Taking 2012 as an example, the yield of coal in China was 3.65 billion tons [1]. In contrast, its consumption was about 4 billion tons. The entire emission of SO2 in China was 21 176 million tons, among which more than 20 million tons was due to the combustion of coal and more than 50 % was generated from thermal power plants [2-3]. It is estimated that by 2020, the coal yield in China is going to rise to 4.8-5.3 billion tons [4], so the... 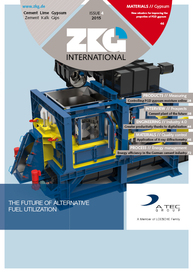 Grinding and calcining of gypsum with Pfeiffer grinding plants

When gypsum is calcined in an atmosphere sat­urated with water vapour at an overpressure of several bars, a-hemihydrate is formed (Fig. 1). The outstanding feature of this plaster is a relatively...

1 Introduction The search for effective technological operations to stabilize technical characteristics used in producing gypsum binders has received a great deal of attention in recent years owing to...

1 Introduction Among calcium sulphate binders, building plasters in particular, plaster of Paris, or gypsum plaster, is the most well-known and often used. Plaster of Paris is a partially calcined...