The backbone consists of a polycarboxylic acid (polycarboxylate) and the side chains of the comb are made of polyether chains. Similar to conventional plasticizers, PCE molecules adsorb on solid surfaces via polycarboxylic acid in the backbone, however side chains do not adsorb but extend into the aqueous solution and prevent the convergence of solid particles. This effect is known as dispersing through steric stabilisation.

By varying the polymer structure, their properties can be adjusted for each desired application [2]. The number and the length of side chains are flexible parameters and easy to change. In plaster slurry, a PCE with longer side chains and low side chain density can quickly adsorb, resulting in high dispersion forces, and thus the desired rheology [3].

Although greater water reduction can be achieved with PCE versus SNF, various undesirable properties can be caused by selecting an inappropriate polymer or disregarding certain potential interactions with other ingredients. For example, this could result in the formation of unstable, uncontrolled foam bubbles, gypsum set retardation or cardboard adhesion issues. However, the application experience has also shown that the PCE technology can provide far more performance advantages than pure water reduction.

Classical dispersant usage options in cement and gypsum based systems are:

1. Reduce water-binder ratio (w/b) in order to increase strength and durability at a given workability

2. Increase workability at a given w/b and strength

During gypsum board manufacture, dispersants are typically applied for:

These typical and further application examples will be discussed as follows:

Deposits of natural gypsum are formed geologically by crystallization from calcium sulphate-supersaturated seawater. Taking examples from China, there are more than 500 gypsum mines under exploitation. In 2015, China’s natural gypsum mining amount was about 32 million t. Subject to the shrinkage of mineral resources, increase of mining costs, increased utilization of gypsum by-product and other factors, it is estimated that the natural gypsum mining amount will continuously decrease. Today, natural gypsum is mainly applied in such fields as high-end gypsum putty, moulding plaster, high-end decorative panels, and it is applied in a low ratio in gypsum boards [4].

A major challenge during the application of PCE-based dispersing agents is their compatibility with varying gypsum raw materials, in particular with impurities, predominantly swelling clays. The purity of natural gypsum varies due to its origin. The type and amount of impurities depend on the source location of the quarry or mine, resulting in a unique binder composition. The presence of swelling clays could result in an incompatibility with the dispersant that would directly affect the workability.

When working with clay-contaminated gypsum, shorter side chains in PCE would provide a better dispersing power rather than PCE with longer side chains, but this will reduce the dispersing efficiency in non-contaminated raw materials [3, 5]. By specific combination of different polymers a more efficient dispersant with improved robustness against varying binder qualities can be achieved. 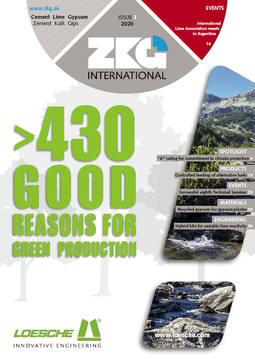 SPOTLIGHT
“A” rating for commitment to climate protection

The spice of gypsum

1 Background Gypsum boards are produced from gypsum plaster, water and additives for the gypsum core as well as cardboard on continuous conveyor lines. Prior to diving into the chemistry of gypsum...