The Union Cement Company (UCC) was one of the first cement producers to be established in the United Arab Emirates (Fig. 1). It was set up in 1972 in the Khor Kwair Industrial Area and production commenced with the first line in 1975 under the management of “­Norcem A. S.”, a member of the HeidelbergCement Group. The second line started in 1977 followed by the third one in 1979. In 2006 UCC commissioned its milestone “Plant 4”, a 10 000 t/d clinker production kiln that increased the clinker production capacity from 1.2 to 4.5 million metric t/a. Moreover; in 2007 cement mills 5 & 6 also contributed to increase the company’s grinding capacity to 4.8 million metric t/a and this made UCC the biggest cement manufacturer in the UAE. As from 2008, the local management took control of the company in line with the long-term strategy set over the last 33 years. Today, UAE nationals represent 22 % of the employees of the company.

With its wide range of products, ordinary Portland cement, low, moderate and high sulphate resisting cement and its own bulk tanker fleet, UCC is prepared to meet all the cement requirements of the construction industry in the UAE. About 85 % of the production is delivered by silo trucks. The rest is delivered in bags, on pallets with Jumbo bags of 1500 kg. UCC has been the only oil well cement producer in the United Arab Emirates since 1980, when Union Cement Norcem Company (UCN) was established jointly with Norcem A. S. of the HeidelbergCement Group to market and sell the American Petroleum Institute (API) certified oil well cement that is produced at the Union Cement plant. UCN has been serving the UAE oil industry over the last 28 years with its “Norwell” brand oil well cement.

In addition to the domestic market, with its proximity to the Saqr Port (Fig. 2), UCC is at the same time in a very logistically advantageous position to serve the markets in the Gulf, the Middle East and East Africa.

Sinoma was the supplier for line 4, which was commissioned in 2006, whilst the other lines were built by IHI. “The plant is running very smoothly” said works manager Ibrahim Gammaz. “When problems occur, we have a very close cooperation with Sinoma and the ­European suppliers of the core equipment” he added. The plant personnel decided during the negotiations about the core equipment. Kiln Nr. 4 is a three support kiln from Sinoma, the refractory lining comes from Refratechnik. The preheater is a five-stage, two-string preheater with calciner from Sinoma (Fig. 3). The original fuels used were oil and gas. After the oil crisis the plant changed to coal and the coal mill was installed.

“We have 1 million years of reserves” Ibrahim Gammaz joked during the visit of ZKG INTERNATIONAL. How­ever, it is true that the raw material situation with material coming from governmental quarries is most stable, with resources of high quality limestone for a very long time. The other materials such as shale, laterite, silica are from local sources and some of them are imported from Oman. Gypsum comes from Oman or from Iran.

The raw meal is ground in two Loesche mills LM 60.4 (400 t/h each; Fig. 4), and the plant has two cement mills type LM 56.3+3 and one coal mill LM 35.3 also from Loesche (Fig. 5). The plant is equipped with one of the largest pendulum coolers from IKN with a capacity of 10 000 t/d. The maximum capacity of the plant is about 12 000 t/d. Huge bag filters ensure comprehensive dedusting. With the slogan “UCC Goes Green” UCC is one of the first cement producers following green strategies. From dust to noise emissions, each value is taken seriously and should be below the emission limits.

Alternative fuels are continuously under investigation. The target is to discover what types of solid wastes are available and in which quantities and qualities. “There are no generally valid garbage collecting systems so far in the UAE”, Nasser K. Saffarini, Maintenance & Projects Manager added. “Most material is collected and completely dumped at present, but of course recycling is being evaluated”. Due to the collective handling of the material, chloride and alkalis can become an issue when alternative fuels are used. “A classification system would be needed to make it easily usable in the cement industry”, Ibraim Gammaz added. “As soon as a suitable quantity and quality are available, we are ready to deal with it”. UCC takes this issue very seriously and has appointed Holtec as a consultant for alternative fuels. They will guide the plant operators in that respect in order to be ready when the time comes.

Between 50–60 % of the electrical power is produced in the plant by a gas turbine. When the prices of the gas are too high, energy prices get close to the net prices of the national power grid. In the UAE, 2010 was a year during which the energy supply was very unstable and the plant needed to have reserves for different tasks. In 2011 and 2012 the situation improved.

The latest project is the waste heat recovery system commissioned at the beginning of 2013 by Sinoma. In December 2012 the pre-comissioning activities had just started. The project completion was expected for February 2013. Hot air is tapped with two lines from the preheater and with two lines from the cooler (Table 1). Mid air and discharge air is extracted at the cooler and fed to one boiler (Fig. 6). The boiler feeds to the turbine which is followed by an air-cooled condenser (Fig. 7). 15 MW heat energy will be retrieved from the WHR system. “Sinoma EC has a great deal of experience all over the world, so we tried to get a reliable partner for this turnkey system” said Mr. Saffarini. “Our consultant Holtec has good experience with WHR systems, so, at the planning stage, they suggested a suitable system which was largely accepted by Sinoma EC”, he added.
www.uccrak.co
This article appeared in 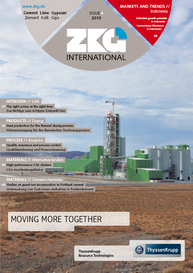 Polysius has been contracted by CIA. de Cimento Itambè/Brazil, to build a new 3,000 tpd cement clinker production line at the Balsa Nova plant, near the city of Curitiba in southern Brazil. One...

Cologne-based Humboldt Wedag GmbH has been awarded an EPC contract by Rohrdorfer Cement Group for the kiln line modernization at its cement plant operations in Gmunden/Austria. The kiln modification...