In 1956, Paris-based Ciments Lafarge entered the North American cement market by erecting a cement plant in Richmond, British Columbia (BC), near Vancouver and forming Lafarge Cement North America (LCNA). The plant is situated in the westernmost Canadian province of British Columbia, about 10 km south of Vancouver in the community of Richmond. It lies on the north bank of the Fraser River shortly before entering the Pacific Ocean. Originally, Richmond was a plant with a wet cement manufacturing process. More than 40 years of continuous production followed, until the plant was modernized in 1999 by removing the wet kilns and installing a preheater and precalciner tower, vertical roller mill for raw materials, recirculating cooler and pulse jet kiln baghouse. Thus, the current state is that of an efficient plant with doubled capacity.

The modernization contributed not only in an increase in performance but also to a decrease in environmental emissions from the Richmond facility. The plant achieves one of the lowest sulphur and particulate emissions from any industrial facility in Canada with the help of the vertical roller mill and kiln baghouse. It continues to work towards a reduction in fossil fuels through co-processing. “That’s where we are now, but our ambitions are much higher”, plant manager Pascal Bouchard says. When visiting the plant, ZKG learned about the current state of plant technology and the logistics associated with supplies and finished products as well as future plans about modernized production, the use of alternative raw materials as fuels.

Most of the raw materials and fuels come in on the water, as the Richmond plant is situated directly on the Fraser River. Thus, the main portion of the limestone, gypsum, some silica sources, coal and petcoke arrive by barge. The rest of the material such as alternative fuels, shale and additional silica sources is delivered by truck.

The limestone used at Richmond originates on Texada Island, an island in the Strait of Georgia about 60 km to the northwest of Vancouver, BC. A former mining and logging area, the island still has a few quarries and old logging roads. It is the largest of the northern Gulf Islands at some 50 km in length and 10 km in width, with a surface area of 300 km2. By 1910, Pacific Lime Company and BC Cement had set up limestone quarrying operations which continued for almost a century. In this time, the island has produced 5 million tons of limestone a year; however, recent economic factors have lowered demand. Much of the product was shipped to Seattle, Oregon or California. Limestone pits were dug all around the north section of the island as well as railways, cableways and concentration plants. Lime kilns for sintering quicklime were raised around the northern end of the island. One survives at Marble Bay and gives the name to LimeKiln Bay. The mining of copper and iron played only a temporaryrole on the island.

Production capacity of the Richmond plant is over 1 million t/a. Like most industries Richmond has been impacted by the global economic slow-down although perhaps less so due to the prevalence of oil and gas businesses in western Canada, comments Mr. Bouchard. The exploration and production of crude oil and natural gas is situated mostly in Alberta, with a significant number of operations in British Columbia – particularly in winter – and consistent activity in Saskatchewan. These sites need a lot of cement for securing their production areas plus the oil wells. In the U.S., the exploitation is more done by fracking, which also requires cementitious material.

Lafarge has three cement production sites in western Canada: Richmond, Kamloops, and Exshaw which is about 70 km to the west of Calgary. “In Exshaw we are undergoing a major expansion to double production by building a new kiln line”, Bouchard explains. “The work is well underway with as start-up target of November 2015”, the Richmond manager says. The main supplier there is KHD from Cologne/Germany.

Unlike in Exshaw, in Richmond most of the plant’s technical equipment is made by Fuller, a U.S. company who is a member of the FLSmidth-Fuller Engineering Group, headquartered in Bethlehem, PA, USA. Starting in the cement production line, the raw mill is a VRM (Fuller Roller Mill or FRM) with four rollers and a table diameter of 4 m. The mill to grind the coal is a VRM by ABB.

After being milled the limestone passes a Fuller low NOx in-line preheater and down draft calciner with five steps before entering the kiln. The rotary kiln of the same manufacturer has two piers at a length of 52 m. The diameter is 4.5 m. It is fed with an elevating pneumatic system.

Behind the rotary kiln a Fuller hybrid CFG/RFT recirculating cooler with eight compartments including an air to air heat exchanger is positioned. The filter plus baghouse is made by Procedair Industries.

The clinker pregrinder, a CKP 180R, is made by Chichibo-Kawasaki Pregrinder. It is followed by two Fuller 4000 kW slide shoe ball mills plus an Osepa N3000 separator. There are two additional cement mills from the old plant that  were kept after the modernization.

The storage consists of three silo groups with a total capacity of 33 000 t. The finished product is shipped via truck, rail and barge. Cement is not bagged at Richmond.

As usual in a modern cement plant, all functions and processes can be surveyed from the main control panel which is situated in the control room of the administration building. Here the technicians on each shift have a large monitor on which the individual sections of the plant and their connections are visible – multi coloured. Cement production runs automatically but the operating personnel always have the ability to manually optimize the process.

Of course, sustainability is a major concern in the Canadian cement industry as it is in the rest of the world. “We’re aggressively engaged in reducing our carbon footprint among many other social, economic and environment efforts”, Bouchard explains.

According to the plant manager there’s two ways to reduce the footprint: The first possibility has been started by the Canadian Standard Association (CSA) which has a standard for Portland Limestone Cement (PLC) that allows to put as much as 15 % of limestone in the cement. “That’s a big change for us, as we only had 5 %”, says Bouchard. “Thus, we can reduce 10 %”.

To follow that step, the cement industry had begun to convert the “Lower Mainland Market” as the greater Vancouver area is called for that type of cement in 2013. Together with state authorities and regulators as the Ministry of Transportation, Lafarge is working to expand the use of PLC. In close contact with the Portland Cement Association (PCA) and the U.S. Department of Transportation (DOT) this includes the U.S. states of Washington and Oregon as well as the prairies and the rest of British Columbia as well. At the same time the markets in Eastern Canada have been transferred to the more frequent use of PLC as well. But there are still some issues that have to be sorted out with the Standards and the DOT. “We’re expecting this progress to go on for the next years” Bouchard explains.

As a second possibility to reduce CO2 the Canadian cement industry is working very hard on alternative fuels. Already the cement producers have reached about 30 % of substitution, and they will continue their efforts in the next years so that there’s quite an increase.

Richmond is permitted to use a variety of alternative fuels. For example, waste from construction and demolition works, nylon fibres from tyre recycling, plastics – especially the portion that cannot be recycled by recyclers (labels and film), carpets and carpet fibres, and saw dust. “Of course we’re looking for other sources and trying to grow the substitution rate”, Pascal Bouchard says, adding: “That’s the future.”

From a sustainability prospective Lafarge Richmond recently announced that they have an agreement with a venture company in western Canada to capture CO2 and convert that into formic acid. The company is in the process of finalizing the layout for their pilot plant, and if everything runs as planned a number of trials will we done at Richmond.  Another benefit of this venture is new connections to the University of British Columbia that has a big campus in western Vancouver.

Another method of advancing sustainability for Lafarge North America is reclamation of former quarries and plant areas. On satellite images of Texada Island a number of former quarries are recognizable as large unwooded areas without soil and hardly any vegetation. Here Lafarge and other mining companies have already started their reclamation projects to transform the barren rock landscape into nature again. Former quarries can also be transformed into recreation areas for the community.“ That’s the best you can do”, states Pascal Bouchard. To move in this direction, Lafarge would stay in close contact with environmental organizations as well as the people living nearby to find the best suitable solutions for all.

Lafarge also works hard on its logistics to minimize the carbon footprint of transportation.  Given the vast geography in the West, terminal placement and consideration of all transport modes is critical to meet customer demand and advance on sustainability.

“The employees at the Richmond Cement plant are highly skilled, some through formal university education and others who have been carefully trained on the job to be specialists in their field. “We are very fortunate to have these people on our team,” says the plant manager.

Employee communication is a cornerstone of the plant’s success. At least once a day every working group has its own meeting, and also once a week there’s a meeting of all groups together. The plant gets a lot of feedback and good ideas from this continuous dialogue, including information from the tradespeople, about safety concerns, electrical and mechanical maintenance, the lab, control operators, etc. This ensures that decisions to be made are not considered in isolation, but have been talked through by the group. “That way there’s a lot of experience involved,” Bouchard says. In addition, everyday they look at the performance of the plant and talk about it in a formal meeting. There, the targets are compared with the actual performance. “If we haven’t met our targets yesterday, we’ll figure out how to meet them today”, the plant manager says.

Of course there’s also support from beyond the plant as Lafarge is a very strong company, states Pascal Bouchard. “We have a very clear vision where they want to go, and that’s communicated broadly – from health and safety, to sustainability, to operational excellence, and finance.” A leader can take this vision, combine it with the tools and operating models, implement local culture and history and perform optimally. 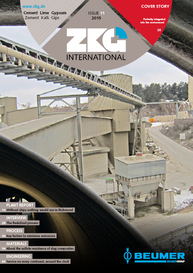 LafargeHolcim is increasing its efforts to further improve the carbon-efficiency of its cements with the launch of the CO?MENT project in Canada. The objective is to build one of the worlds first...

Lafarge has sold gypsum activities of its North American subsidiary to an affiliate of Lone Star Funds. According to a press release the sale price was US$ 700 million ( 533 million). Lafarge...

HeidelbergCements British subsidiary Hanson UK has become a partner in the HyNet North West consortium, which aims to create the worlds first low-carbon industrial cluster in the region of North...

Joint venture with Elementia in Mexico

Lafarge announces it has reached an agreement with ­Elementia to combine their cement assets in Mexico. Lafarge will bring its two plants of Vito and Tula for a total capacity close to 1 million t/a,...