Researchers from the École Polytechnique Fédérale de Lausanne (EPFL) in Switzerland together with partners from three prominent Indian Institutes of Technology – IIT Delhi, IIT Madras and IIT Bombay – and from univers-ities in Brazil and Cuba as the University of Las Villas at Santa Clara, Cuba have managed to double the quantity of cement produced from the same quantity of limestone by substituting a large portion of clinker (an intermediary material made by heating limestone at very high temperatures) with calcined clay (Fig. 1).

Limestone Calcined Clay Cement, or LC3, has the potential to generate 20-30 % less CO2 emissions compared to traditional Portland cement; a major reduction considering that cement accounts for 5-8 % of today’s man-made emissions. EPFL is the leader in managing the project. Currently, LC3 is being tested on a large scale in India. This new type of cement substitutes up to half of the carbon intensive materials traditionally used to make cement with highly abundant clays.

Materials such as slag and fly ash are already used worldwide to decrease the ratio of clinker needed to manufacture cement. However, these materials are not always available locally and their limited supply will not be able to meet the rapidly increasing demand for cement.

“Global cement demand will double by 2050. By then, India will surpass China as the largest producer yet, India’s quarries are estimated to provide limestone for only 50-60 years more. LC3 can provide a long-term sustainable solution because it can use low grade kaolin clays, unsuitable for most industries and largely available in many parts of the word, including India”, explains Professor K­aren Scrivener, Head of the LC3 project at EPFL. LC3 is a low carbon and low cost cement that delivers similar or even superior performance properties compared to Portland cement. The blend can be easily manufactured in existing production lines, requiring only minor capital investments.

“The potential impact of the LC3 project is very significant. After water, concrete is the most used material in the world. Any emissions reduction will have a substantial impact”, explains Scrivener. “LC3 can become an essential construction material, especially in fast-growing emerging economies where minimizing environmental impact and resource depletion are a top priority”. It is estimated that using LC3 instead of regular cement can save up to 500 million tons of CO2 per year by 2050. “If we want to advance the sustainability of concrete – its cost, availability and environmental footprint – we have to act before demand increases exponentially”, says Scrivener.

India is the first country where LC3 is being tested (Fig. 2), both in the laboratory and in the field, on a large scale. It has been selected for the size of its market and its growth potential, the wide availability of kaolin clays and the commitment of the Indian government to reduce CO2 emissions. An LC3 project meeting took place on 16.09.2014 at the Habitat Centre in Delhi, India, to define the next steps of the pilot phase.

After a preliminary study and a successful industrial pilot phase in Cuba (Fig. 3), the LC3 consortium is testing the low carbon cement technology in India before it is introduced internationally. 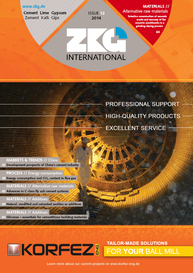 After two successful conferences at EPFL Switzerland in 2015 and CIDEM Cuba in 2017, The Indian Institute of Technology, Delhi will be organising the 3rd International Conference on Calcined Clays for...

The Indian cement industry, currently in its 103rd year of existence, has a 7?% share in global cement production. Technologically, Indian cement plants are comparable with the best in the world. In...

The Weimar-based IBU-tec advanced materials AG wants to reduce the CO2 emissions generated during the cement making process. The carbon dioxide emissions are to be reduced by up to 40 % by means of...

The Weimar-based IBU-tec advanced materials AG wants to reduce the CO2 emissions generated during the cement making process. The carbon dioxide emissions are to be reduced by up to 40??% by means of...