On March 15th, 2012 IBAU ­HAMBURG has officially handed over during an inauguration ceremony the new ­Cement Import Terminal in the Malmö NorthernHarbour (Fig. 1) to ­CementaAB, being part of the ­HeidelbergCement Group. The EPC-contract, including piling works, civil works, steel structure supply and erection as well as electrical and mechanical supply and erection has been successfully commissioned in November 2011 without any delays. IBAU HAMBURG successfully completed the 18 months construction and commissioning phase without one single accident. The Cementa owned ships can discharge at the terminal with up to 1000 t/h. The cement is fed to the multicompartment storage silo which has a height of 90 m, a diameter of 26 metres, with 6 chambers and a capacity of 30 000 tonnes. The distribution takes place via three combined truck/wagon loading lanes, each with a capacity of 250 t/h. The whole terminal can be operated 365 days/year and 24 hrs/day fully automatically. According to the Mayor of the City of Malmö, the new ­Cement Import Terminal with its unique design has now become a new landmark in the Öresund region (Fig. 2).
www.ibauhamburg.de
This article appeared in 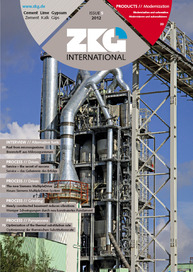 As a general contractor, Ibau Hamburg led the construction of a cement terminal for Cementa HeidelbergCement Group at the port of Malmö/Sweden (Fig. 1). The multi-chamber silo, which is fed by a...

Apeco successfully completed the conveyor system project at the Cementa cement plant in Slite, Gotland/Sweden. Within the framework of the project, Apeco delivered two belt conveyors with different...

The Ukrainian cement producer Doncement, a subsidiary of the HeidelbergCement Group, has awarded Intensiv-Filter, the leading specialist in filtering installations, a contract for a bag filter,...